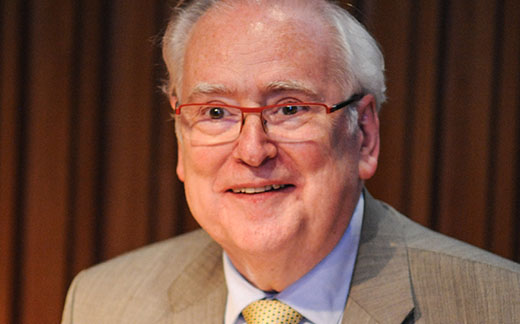 president of the National Academy of Education (Argentina)

Guillermo Jaim Etcheverry obtained his M.D. in 1965 and his Ph.D. in 1972, both at the School of Medicine of the University of Buenos Aires. Committed since his graduation to teaching and full time research in the field of Neurobiology, he was Principal Investigator of the Argentinean National Council of Research (CONICET) until 2012 as well as full professor and director of the Department of Cell Biology and Histology of the School of Medicine of the University of Buenos Aires until 2008.
Between 1986 and 1990 he was Dean of that School of Medicine. He carried out postgraduate work in Basel, Switzerland and later on received the John Simon Guggenheim Memorial Foundation Fellowship to work at the Salk Institute in La Jolla, California in 1978. He is Member of the Academy of Medical Sciences of Córdoba, of the National Academy of Education, the National Academy of Sciences of Buenos Aires and the Argentinean Academy of Arts and Sciences of Communication.
Besides his many scientific papers and book chapters on his original research, in 1999 he published &quot;La tragedia educativa,” an influential book that received several awards. He regularly writes on culture and education in major Argentinean newspapers and frequently speaks on these subjects as invited by various social organizations. In 2002 he was elected President of the University of Buenos Aires, the major university of the country, for a period of four years. Active in the board and council of foundations devoted to research and education, among them the Pew Latin American Program in its origin and the Fulbright Commission Argentina and the former Antorchas Foundation, he received several distinctions. He was named “Master of Argentinean Medicine” (2001), and in 2004 he was elected Foreign Honorary Member by the American Academy of Arts and Sciences, US and participated in the Selection Committee of the Rolex Awards for Enterprise. Between 2005 and 2011, he chaired the Selection Committee of the Latin American and Caribbean Fellowships awarded by the John Simon Guggenheim Memorial Foundation in New York. He was named Chevalier dans l’Ordre des Palmes Académiques by the French Republic, and between 2006 and 2012, he chaired the Fundación Carolina of Argentina, involved in the educational and scientific cooperation between Spain and Latin America. In 2007 he received the Médaille d’Or from the “Société d&#39;Encouragement au Progrès” in Paris, France; in 2009 he received an Honoris Causa degree from the Universidad de Morón in Argentina; in 2010 the Bicentennial Medal awarded by the City of Buenos Aires and in 2014 the Santa Clara de Asís Prize for his trajectory as well as the Honoris Causa degree of the Universidad Nacional del Noroeste de la Provincia de Buenos Aires (UNNOBA). In 2017 he was awarded the “Pluma de Honor” prize by the Argentine Academy of Journalism and the Honoris Causa degree by the Universidad CAECE, Buenos Aires. Dr. Etcheverry was elected president of the National Academy of Education of Argentina in 2018.