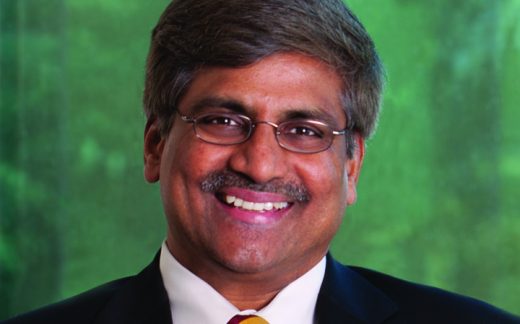 Panchanathan was the founding director of the School of Computing and Informatics and was instrumental in founding the Biomedical Informatics Department at ASU. He also served as the chair of the Computer Science and Engineering Department. He founded the Center for Cognitive Ubiquitous Computing (CUbiC) at ASU. CUbiC’s flagship project iCARE, for individuals who are blind and visually impaired, won the Governor’s Innovator of the Year-Academia Award in November 2004.

In 2014, Panchanathan was appointed by President Barack Obama to the U.S. National Science Board (NSB) and is Chair of the Committee on Strategy. He was appointed by former U.S. Secretary of Commerce Penny Pritzker to the National Advisory Council on Innovation and Entrepreneurship (NACIE).
Panchanathan is a Fellow of the National Academy of Inventors (NAI), and a Fellow of the Canadian Academy of Engineering. He is also the Fellow of the Institute of Electrical and Electronics Engineers (IEEE), and the Society of Optical Engineering (SPIE). He is currently serving as the Chair of the Council on Research (CoR) within the Association of Public and Land-grant Universities (APLU). Panchanathan was the editor-in-chief of the IEEE Multimedia Magazine and is also an editor/associate editor of many other journals and transactions.
His research interests are in the areas of human-centered multimedia computing, haptic user interfaces, person-centered tools and ubiquitous computing technologies for enhancing the quality of life for individuals with disabilities, machine learning for multimedia applications, medical image processing, and media processor designs. Panchanathan has published over 440 papers in refereed journals and conferences and has mentored over 100 graduate students, post-docs, research engineers and research scientists who occupy leading positions in academia and industry. He has been a chair of many conferences, program committee member of numerous conferences, organizer of special sessions in several conferences and an invited speaker, panel member in conferences, universities and industry.